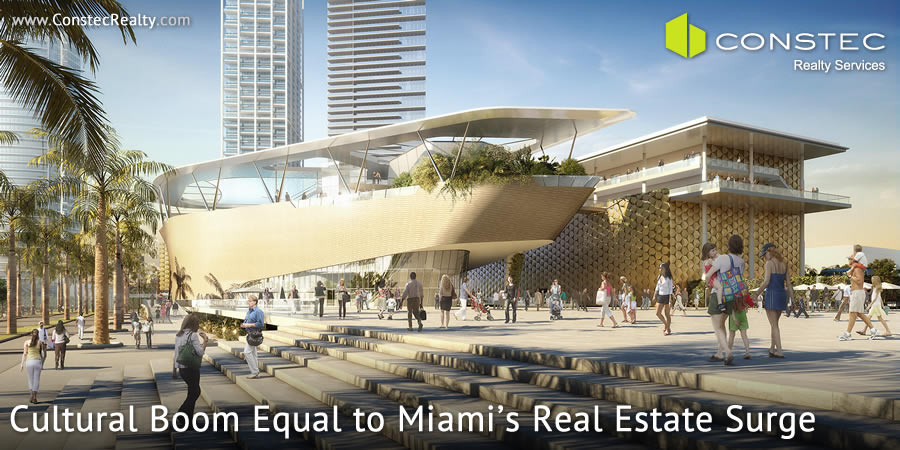 In recent years the Miami real estate market has become a focused story because of the explosive and publicized growth with new residential development projects.

However, less known is the fact that simultaneously with this Miami real estate boom there has also been a cultural explosion. This cultural explosion is not only in the world of art and entertainment, but also in the culinary industry and commerce of luxury brands.

Some areas in Miami, like the Design District, Brickell and Downtown Miami have transformed themselves. They offer a combination of residential and entertainment within the same district which had been unprecedented.

What follows are some of the most recent additions to the world of culture in Miami that have been made in recent years. Many of them are already completed and others under construction.

At the center of this cultural revolution that Miami is experiencing are two major museums: Perez Art Museum Miami (PAMM) and the Miami Science Museum. Together, these two museums have transformed the Bicentennial Park, now known as the Museum Park in downtown Miami.

This spectacular museum on the shores of Biscayne Bay in Downtown Miami, opened its doors a few months ago. This museum, of modern and contemporary design, is dedicated to collecting and exhibiting international art of the 20th and 21st century. There is also a beautiful restaurant next to the bay and spectacular ballrooms for parties and/or business meetings.

The Science Museum, still under construction, should be opening its doors in early 2015. This museum, costing an estimated US$165 million when finished, will function as a technology innovation center for sustainability by harnessing energy from water, sun and the wind in order to conserve resources.

The museum will include:

This magnificent cultural center in Miami Beach opened its doors in 2011. It is the only full-time orchestral academy in the United States preparing musicians for symphony orchestras. It offers a variety of concert halls for different types of presentations and a 7,000 square foot outdoor wall where free concerts are screened for the enjoyment of the public.

This stunning complex in Downtown Miami is comprised of 3 buildings prepared specifically for ballet, opera and concerts. It is one of the largest cultural centers in the United States.

To begin your Miami real estate search in any of the areas described above search here.

« Miami preconstruction sales. Where are we? Best Available Luxury Condos in Miami Part 1 »